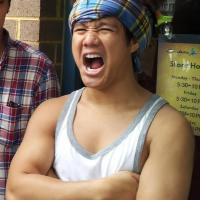 My name is Dominick Pham and I’m an electrical-engineer-turned-UI-developer residing in Seattle, WA. I work as a Design Technologist for the Concept Lab at Amazon where I build prototypes around the future of shopping. Previously I was a front-end engineer at Webs, Inc. where a pet project of mine resulted in the acquisition of the company by VistaPrint for $117.5 million.

I love hackathons because I enjoy being hyper-focused and solving problems in a fast paced environment. Most recently, I conducted (organized) Seattle 2014 StartupBus, a competition where participants form teams and build a business in 72 hours on a moving bus headed for SxSW in Austin, Texas.

Aside from programming and building robots, I love to design and draw. I currently run an art blog called WordDice where a friend and I try to compose three random words into a drawing.